An Assessment of the U.S. Job Market in Commercial Real Estate

Job opportunities in commercial real estate enjoyed the best summer ever, exceeding previous highs set in 2007, as hiring built on momentum from the first half of this year, according to the Cornell/SelectLeaders Job Barometer. Analysis shows 3rd quarter opportunities up 23.3% over the same period one year ago, and 43.5% more postings than in that quarter of 2012. July also saw the third-highest single month total so far this year, behind only the figures from May and June. “This is no small feat,” said Susan Phillips, CEO of SelectLeaders, adding “considering that the number of jobs posted in June was the highest it has been since the Job Barometer began tracking these numbers in 2006” The Job Barometer, a joint research effort between Cornell University’s Baker Program in Real Estate and the SelectLeaders Real Estate Job Network, has tracked job opportunities and career trends in commercial real estate since 2006.

“Commercial real estate is clearly now a seller’s market for talent,” said David Funk, director of the Baker Program in Real Estate, adding “we’ve witnessed a significant fall in the ratio of job seekers to position openings, and not surprisingly compensation is starting to move accordingly.” While opportunities are at an all-time high, the industry’s downturn in 2008 resulted in significant numbers of professionals leaving the industry and a depleted pipeline of entering professionals from US graduate schools. “The average number of applications per job has declined by about 30% from 2009 to 2014,” said Funk.

Commercial Real Estate Job Opportunities tracked by the Cornell/SelectLeaders Job Barometer from the 4th Quarter 2006 through the 3rd Quarter of 2014.

This drop in average applicants is not due to a lack of interest, but rather a surge in the number of available jobs. For the period from January through August, job opportunities were up by 26.28% over 2013, and 58.05% over 2012.

It is also indicative of the increasingly broad skill set that employers are expecting from qualified candidates. “There is a clear increase in the variety of special skillsets real estate employers are seeking in commercial real estate, which is reflective of an industry adding complexity, particularly in its technology requirements,” said Funk, adding that requirements such as ARGUS and knowledge of specific property management software may limit applicant pools.

An analysis of data from jobs posted to SelectLeaders shows certain skills becoming increasingly common qualifications. Familiarity with a variety of software products is much more in demand now than even a few years ago. Areas of expertise that were found to be more prevalent in job postings included accounting principles, knowledge of zoning, and familiarity with low income housing tax credits. 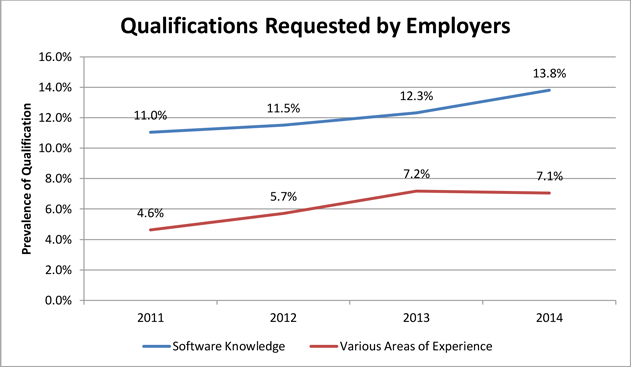 While the summer was remarkable for the opportunities that were presented, there are indications that employment opportunities in commercial real estate are sustainable. “Institutional allocations to real estate are expected to again go up 49 bps this year, international capital continues to target US real estate, and $2.5 trillion sits in money market funds,” said Funk, concluding that capital flows into real estate should sustain the employment picture despite interest rate and valuation concerns. 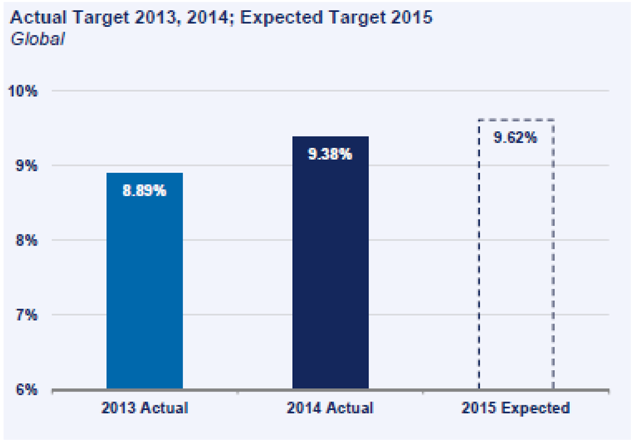 Many of the industry’s largest firms are substantially increasing their hiring this year, according to the Cornell 30. The Cornell 30 is an index of job opportunities available with thirty of the most prominent firms in commercial real estate. It is tracked each month, and indexed to September of 2012 for comparison purposes. October 2014 was the best month on record for the Cornell 30 with overall opportunities numbering 138% of those available in September 2012. “We have seen a significant uptick in job postings by large, full service companies looking to hire at all levels,” said Marc Torrey, Global Director for SelectLeaders. Toll Brothers is just one example of a large real estate firm that is in the market for talent. The firm expects that its hiring count for this year will reach more than 1,000 employees, according to Jon Downs, vice-president for human resources at Toll Brothers.

According to the Cornell 30, the strongest performing segments of the industry have been construction, brokerage, and investment management. At the beginning of the month, these areas had 273%, 176%, and 158%, respectively, of the number of job openings available in September 2012.

Where you are job hunting in real estate matters as a geographic mismatch between opportunities and applicants exists. The Job Barometer found that California, with 33.3% of all applications, and New York, with 32.8%, were the most popular states for job candidates but makes for intense competition. Only 30.4% of job postings were in California and a mere 22.8% were in New York. At the other end of the spectrum, Texas provides ample opportunities for candidates. 11.5% of all jobs posted to SelectLeaders in the third quarter were in the Lone Star State, yet positions in Texas only received 8.9% of all applications. Massachusetts shows a similar opportunity, as its real estate firms posted 6.8% of opportunities, only to receive 4.8% of applications.

The retail sector again commanded the largest share of job opportunities, a position that it has maintained since taking that title from the multifamily sector in the first quarter of 2013. The opportunities are largely in redevelopment, repositioning, and leasing, however. “Many opportunities on the SelectLeaders Job Network reflect the challenges the retail sector is facing. A representative recent job posting read, “We buy troubled regional malls and shopping centers. We primarily focus on REO’s and other troubled assets,” noted Phillips.

Single family housing continued its strong year in the third quarter, representing 10.04% of hiring, the second highest quarter on record for the sector, and is a sector poised to continue expanding its opportunities. “Home builder confidence is significantly ahead of housing starts, and we’re seeing the large homebuilders aggressively adding talent,” said Funk, adding “the job opportunities are broadly distributed across sectors and job functions, but housing and capital flows are what argue that we should see sustained hiring in CRE.” 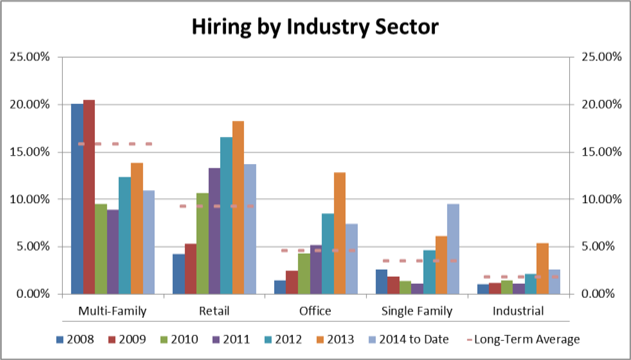 At the same time, multifamily hiring declined for the third consecutive quarter to 9.76%, its lowest mark since hitting only 8.82% in the third quarter of 2012. “Multifamily has been on fire for the last three years, and this slight downturn simply represents a slowing from the torrid development pace MF has been on,” said Torrey. Despite being in a bit of a slump, multifamily hiring remains a strong force in the industry, as it was the third most prevalent sector represented in third quarter hiring.

Employment Picture by Job Function: Hiring Up for Accounting

What jobs are available? Jobs in development and property management have skyrocketed in the last two years, and are currently two of the most prevalent areas of opportunity. Development jobs account for 12.4% of all postings, second only to property management, and has been so hot that employers are often finding themselves in bidding wars for development talent. “Leadership on development projects is critical, and when someone leaves for another opportunity it can create a chain reaction, with employers bidding up recruiting packages in order to insure project continuity,” said Phillips.

The most prevalent need among employers in commercial real estate remained in property management positions in the third quarter, which accounted for 14.5% of all postings. Accounting/control is another hot job function, and it is closing the gap between property management and all other functions. Accounting/control, which represented 13.9% of postings, overtook development as the second most listed job function in the third quarter after three consecutive quarters of lagging behind it. It was also an excellent quarter for accounting/control opportunities in that they reached their highest mark since the second quarter of 2010, when they had represented 16% of all postings. â€œThe rise we see is not as much in salaries but in total compensation with incentive and payfor-performance bonuses. This helps to explain why hiring is being extended out later, as people stay for their bonuses,â€ Phillips noted. 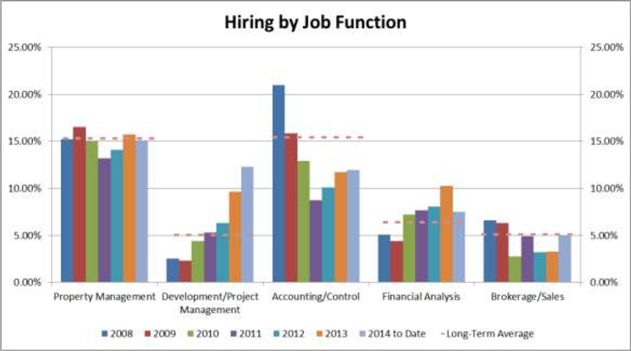 Opportunities for financial analysts, representing 6.6% of postings declined for the third straight quarter, after hitting its highest mark on record with the job barometer (11.8%) in the fourth quarter of 2013. Despite the drop, this was the twelfth consecutive quarter in which financial analysis hiring was above its long-term average of 6.40%. In addition, this job function has shown stronger results in the fourth quarter than in the third for 2011 through 2013. Time will tell whether this trend will continue in 2014 as well.

Interestingly, though they do not account for a large portion of the commercial real estate hiring picture, job opportunities have been somewhat more prevalent than normal in human resources (1.6% versus a long-term average of 0.8%). Ana Mossa, SelectLeaders Research Director said, “This not only signals that CRE hiring has returned with companies staffing up their in-house capabilities, but we note an increase in the experience required as companies invest in winning the competition for talent.”

The rankings for the top primary functions of hiring firms remained unchanged in the third quarter. Investments (asset management) took the top spot at 19.9%, followed by development, at 14.7%, property management, also with 14.7%, and advisory services/consulting firms, which represented 11.5% of all postings. The investments field has enjoyed a long reign at the top of the list, having been the most represented field in the job barometer for fourteen of the past fifteen quarters. This finding is particularly interesting for investment firms, which have typically been less active in the Job Barometer in the second half of the year than the first over the past three years. The fact that the third quarter posted a higher figure than the first in this field goes against this trend. It will be interesting to see whether the fourth quarter will see sustained momentum in this field or a reversion to more traditional seasonal susceptibility.

Hiring among development firms increased in the third quarter to 14.7%, from 13.4% in the second quarter. Property management firms, which also represented 14.7% of the hiring for the third quarter, declined to slightly below their long-term average of 15.9%.

The advisory services/consulting field represents less of the hiring picture, at 11.5%, than it did at this time last year, when it recorded 12.5%. Though advisory services/consulting firms are up for the second consecutive quarter, they are still below their long-term average of 14.2% of job postings, and have only surpassed that mark once in the past nine quarters.

About the SelectLeaders Job Barometer

The SelectLeaders Job Barometer, published since 2006, is the foremost survey of employment opportunities, trends, and hiring practices in the commercial real estate industry.